The spirulina
Spirulina everything you want to know about his spirulina cultivation method, how do we harvest spirulina, [...]

Spirulina is the most complete natural food of our planet. It also remains an undeniably effective dietary supplement due to its therapeutic values.

a) - Spirulina and Nutrition

Unlike other microorganisms such as yeast and Chlorella, Spirulina is rich in micro nutrients easily assimilated by the body. 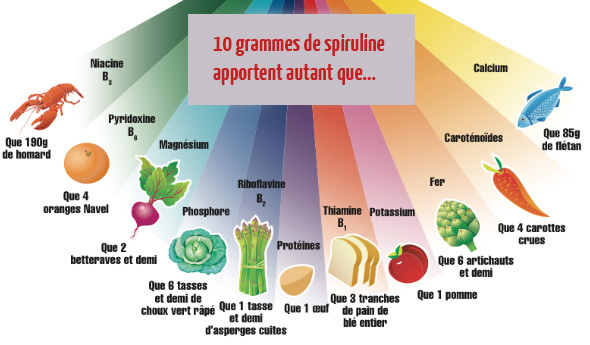 All this makes it an excellent food supplement.

b) - Spirulina and malnutrition

Malnutrition is the most powerful scourge of our planet. It kills more people than wars and natural disasters combined.

Spirulina can respond effectively against malnutrition and the many ONG now integrates with their programs.

Undisputed expert in the cultivation of the microorganism, the Antenna TechnologiesIndustry Association demonstrated by clinical trials that the absorption of a daily dose of 1 to 3 grams of spirulina for 4 to 6 weeks enough to cure a child with severe malnutrition, kwashiorkor or marasmus type. Directly assimilated, spirulina has a digestibility equal to that of human milk. It requires no cooking and consumption shows no cons-indication or limitation.

The use of algae to feed livestock is an ancient skill. It is even reported that cattle in Britain went himself at low tide near shore to graze stranded seaweed. Roads were built to facilitate access to the animals to these resources. This use of algae is recognized throughout northern Europe, particularly on coasts and islands. Various preparations made from seaweed and oats, for example, have existed.

Today, farmers are faced with a problem of autonomy protein that spirulina could solve. Indeed, in intensive systems, protein intake is via soybeans imported from Brazil and the United States and often genetically modified.

Even in grassland systems, farmers are facing the same problem during the 3 winter months.

Spirulina is a big oxygen provider. Forests play an important role in the storage of carbon dioxide (C02). Trees are the best plants to fix carbon: 1 up to 4 tons per year per hectare. But Spirulina is even more effective: in the California desert, it may set up to 6.3 tonnes of carbon per ha / year; at the same time it will generate 16.8 tons of oxygen (ha / year).

Cleaning system: François Haldermann exhibited at the Mialet symposium on spirulina (June 2002), its ventilation system made in Ecuador to digest the organic matter accumulated in the culture media. It goes well with a BOD (biological oxygen demand) 15mg to 8mg BOD. This aeration system allows complete recycling of the culture medium while maintaining high productivity of the basins.

Another example: the Earthrise farm (California), water is recycled in the basins after filtering and dewatering. In fact, significant losses of water are evaporated. The protein from Spirulina consumes 1/3 of the volume of water necessary for the soy protein, 1/5 of the water required for the wheat protein, and only 2% of the water required by the beef protein ! In this case, only 30 liters are required to produce 10 grams of Spirulina. This is actually much less than 55 liters of water required for a half loaf of bread, 245 liters for a glass of milk, or 4900 liters for a hamburger ...!

Production of Spirulina: it's good for the planet

Although Spirulina grows in water, it requires much less water per kilo of protein produced than any other food (plant or animal), and reached again a record!

In cosmetics, spirulina is mainly used as :

"The skin of the face and whole body, like every living substance subject to the law of aging. Some of the changes due to aging are inevitable, but others can be controlled. Thus we have chosen and tested over the years all products whose effects and quality have been results but no higher than the efficiency of Spirulina. "(Engineer Sophie Petitperrin, contact ANNEX 1).

Spirulina is rich in natural beta-carotene acts as an antioxidant complex, in synergy with other carotenoids in microalgae. It is also an important source of the enzyme superoxide dismutase (SOD), the antioxidant activity is important. Spirulina is going to participate effectively in the fight against free radicals of oxygen and thus help to slow the aging process.

b) - to strengthen nails, hair, skin

Spirulina contains all the vitamins and minerals necessary for skin, hair and nails

The use of certain varieties of algae as a means of regularly enriching the land is a former expertise common to the people of northern Europe. The widespread use of chemical fertilizers after the Second World War put an end to such practices.

Today, some companies specialize in the production of organic fertilizer. Biomass rejected by the spirulina cultures could be valued in this direction.

7 ... and even biological control against mosquitoes!

Male mosquitoes from Spirulina ponds would be sterilized by high pH of the culture (according to an Indian study) and basins would then constitute a biological control method against mosquitoes.